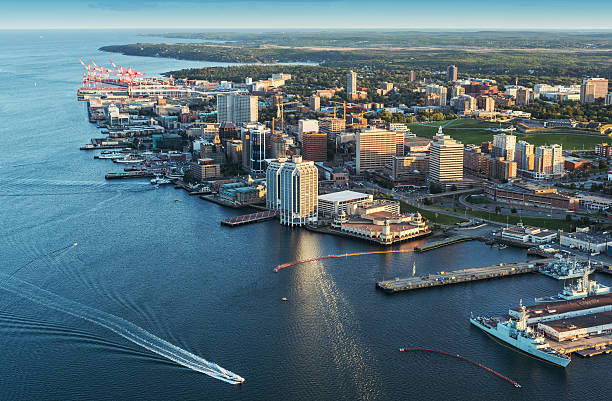 Halifax and Toronto are both lovely cities in Canada. Halifax is a pretty small city located on the East Coast of Canada in Nova Scotia province and sits on the Atlantic Coast with interesting buildings, architecture, and museums.

Halifax has a population of about 390,000. It offers scenic and peaceful neighborhoods to choose from. If you enjoy history, Halifax is a place tied to a lot of history. It is home to a large population of young people.

The people of Halifax are known to be warm, friendly, and hospitable. Transportation in Halifax is in four categories; bike, bus, car, and walk. It also operates a public transit system and has a public-funded education system that is of good quality.

Halifax hosts several university campuses and therefore provides several options for university and college studies. Some institutions or colleges that can be found in Halifax include; Mount Saint Vincent University, Dalhousie University, Technical University of Nova Scotia,  University of King’s College, and NSCAD.

As compared to Toronto, Halifax houses are much more affordable with a difference of nearly 40 percent in the rental cost. The average cost of a house in Halifax was approximately $320,000 according to a report in 2019.

Toronto on the other hand is the largest city in Canada and one of the most cosmopolitan cities in the world with about 6 million people and more than 200 languages. Toronto sits on Southern Ontario’s Golden Horseshoe.

Just like its motto, “Diversity our strength”, Toronto is known to be one of the world’s most multicultural cities, having almost half its population as immigrants. Toronto is a very safe place to stay. Just like Halifax, Toronto also operates a public transit system which is operated by the Toronto Transit Commission (TTC).

Ranking 23rd in Academic Ranking of world universities, Its university (Toronto University) is rated one of the world’s most prestigious institutions. Toronto also hosts two other universities (York and Ryerson University) and several other community colleges.

Due to its multiculturalism, it is known to be a place with multiple food choices, festivals, and arts. It also has lovely art scenery, vibrant nightlife, wonderful restaurants, and lots of supporting events.

As much as Toronto and Halifax are both wonderful places to live in, they both have their disadvantages.

Halifax though is a wonderful city with beautiful scenery, friendly people, affordable housing, and a safe place to live in, it also has a sluggish economy with limited job opportunities. The challenge of getting a stable job is one of the most common complaints from the people living in Halifax. The jobs available are mostly construction work, fishing, and boat operation. If you lack experience or expertise or even the strength for these jobs, it would be very difficult trying to get a job in Halifax as there are very few corporations and industries.

Due to economic challenges and the lack of enough large industries to support the government and its services, the tax rate in Halifax is also quite high to make up for the shortfall.

Although housing in Halifax is quite affordable as compared to Toronto, the cost of living in Halifax can be considered to be relatively high especially groceries. Groceries in Toronto are 16.57 percent lower than in Halifax. However, the prices of some goods like fresh seafood are at a low price.

Halifax has the lowest minimum wage in the country at only $11 per hour, which was recently increased by the local authority by adding 55 cents which is still clearly not enough to survive with the high cost of living in the city.

The cost of living in Toronto has been moving higher and among this is the cost of housing and rents. Even transportation is quite expensive. The average cost of rent for a one-bedroom apartment is about $1,800 CAD. Not only are the housing and transportation expenses, but even daily expenses are also very high.

The tax rate although is 13 percent less than some other provinces, can still be tagged as being quite expensive.

Although Toronto is a big city, due to the increase in population size, the city is becoming congested and lacking enough infrastructure for both the old and newcomers in the city. This also is the cause of high traffic congestion.

Even with its beautiful scenery, Toronto is highly polluted with a lot of people littering the city with used masks, Tim Horton’s cups, and all sorts of garbage. The air is also polluted due to the number of vehicles in the city. Keeping the city clean is a big challenge due to the large population size. There is also the problem of noise pollution from cranes and construction vehicles and equipment all day long as new buildings are always being erected.

Even with all the job opportunities in Toronto, there is still a lot of competition between the locals and immigrants which makes it almost impossible for immigrants to find a job without Canadian experience or certification.

Cycling on the streets of Toronto is not safe as the city has failed to provide good cycling lanes for cyclists and people whose form of transportation is the bike.

Toronto although is a place with a wide range of cuisines and wonderful eateries, and home to foodies, most of its food is imported from the US as it is difficult to grow food and plants due to their frozen soil for the longer part of the year. So the quality of the ingredients gotten from Toronto is not always of good quality.

Living in Halifax or Toronto has its advantages and disadvantages. They are both lovely cities with beautiful scenery but then it’s all about the environment you favour more. Would you like a city with millions of people, lots of opportunities but has a high standard of living?

Or would you like to live in a small friendly city with more affordable housing but fewer opportunities? At the end of the day, your decision will depend on your values. We hope we have been able to assist you with our description of the difference between living in Halifax and Toronto.