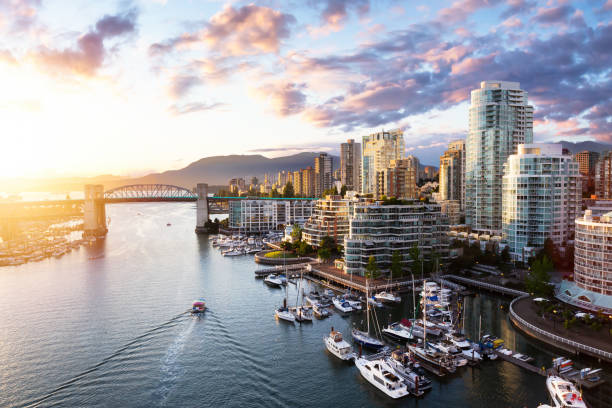 Ranking as one of the world’s most habitable cities and the best city to live in North America is Vancouver, a coastal seaport city with over 2.5 million, located on the west coast of Canada. It is one of the most ethnically diverse cities in Canada.

Vancouver sits on the pacific west coast of Canada and is the largest city in British Columbia. Vancouver has gained its reputation as one of the most habitable cities globally over the years, being a very vibrant, clean, and beautiful city with amazing oceanic views, good healthcare, having delicious varieties of dishes to choose from, etc.

Vancouver can be the best foodie city in North America with its chefs sourcing the best seafood and vegetables.

As earlier stated, Vancouver is one of the most ethnically diverse cities in Canada. About 44 percent of metropolitan residents and about 50 percent of Vancouver’s residents do not speak English as their first language. Also, about 30 percent of the city’s inhabitants are of Asian backgrounds. Immigration into Vancouver has increased dramatically over the last 30 years, making the city even more linguistically and ethnically diverse. After Ontario, British Columbia was the second Canadian province to legalize same-sex marriage. So, Vancouver has a large gay community.

Vancouver is a clean city with wonderful and huge snowcapped mountains which serve as amazing backdrops. It also has a wonderful beach. Lovely natural landscapes surround the city. There are so many amazing views everywhere around the city of Vancouver. So, if you decide to live in Vancouver, you would be inspired and invigorated from time to time by the lovely picturesque environment.

During the fall and winter periods, Vancouver has the warmest weather in Canada, surrounded by mountains that naturally block and protect the city from the shivering cold of the arctic breeze.

It snows for only about ten days a year in Vancouver, with depths of only a few centimeters. Compared to other cities in Canada, Vancouver has almost no snowfall but has a lot of rainfall.

It usually rains there from November to March, making it one of the foggiest cities. Summers are always delightful in Vancouver, and people can have an enjoyable time at the beach with family and friends and enjoy other outdoor activities during this period.

They also have schools for art and entertainment, which includes; Emily Carr University of Art and Design and Vancouver film school. The city offers different schooling options to choose from.

The healthcare system in Vancouver ranks high on an international level and is very extensive. Canada takes care of its citizens and permanent residents. Its free and public healthcare system is very generous to its citizens and permanent residents. However, non-residents who have not yet gained a permanent residency permit are not eligible for this offer, and the extent of their healthcare coverage depends on their immigration status. In Canada, healthcare is paid for by taxpayers. The Medical Services Plan (MSP) covers Canadians in British Columbia, and this plan covers dental and oral surgery, eye examinations, midwives’ and doctors’ services, and diagnostic services. So, if you plan on moving to Vancouver, make sure you have travel insurance for emergency cases.

Vancouver has successfully transitioned into a diverse knowledge-based economy and has one of the most vibrant economies in Canada. It has been the fastest-growing economy in Canada in recent years. Its major economic sectors include; film and Tv, tourism, agriculture, natural resources, construction, and international trade. The port of Vancouver is the largest in Canada. It provides tax revenues of about $1.4 billion a year and approximately 115,300 jobs in Canada. Vancouver has a strong economy with a wide range of industries and opportunities.

The crime rate in Vancouver is moderately low, making the city a safe place to live. Major crimes such as stabbing, shooting, random acts of violence, and muggings are incredibly rare. Vancouver is one of the most peaceful cities in Canada.

You can move city safely as everywhere is safe except areas like the downtown east-side.

All good things come with a price, and Vancouver is not an exception. Although it has many benefits, the cost of living in Vancouver is very high and is known to be one of the expensive cities in Canada. Vancouver has the most expensive housing market in Canada, with the average cost of a one-bedroom apartment a $1,900. The cost of transportation and groceries is also quite high at $93 and $315 monthly.

Vancouver is likely to face huge natural disasters such as earthquakes, tsunami waves, floods, heatwaves, landslides, windstorms, etc. Vancouver is located in an active earthquake region, and the area has frequent earthquakes as the Rocky landscapes and mountains are unstable.

The rate of homelessness has continued to accelerate in Vancouver since 1999 and is presently considered a social crisis. The two main causes of homelessness are; cost of living and lack of income. The social issue of homelessness started from the federal funding cuts to affordable housing.

Salaries are quite low in Vancouver for those who are not skilled workers. The minimum wage is about 14 CAD per hour. So living in such an expensive city can be quite hard juggling bills.

Although Vancouver is ranked as one of the best cities to live in, like every other city, it has its good and bad reputations that we have been able to point out to you. You can decide using the above information if you would like to live in Vancouver or not.