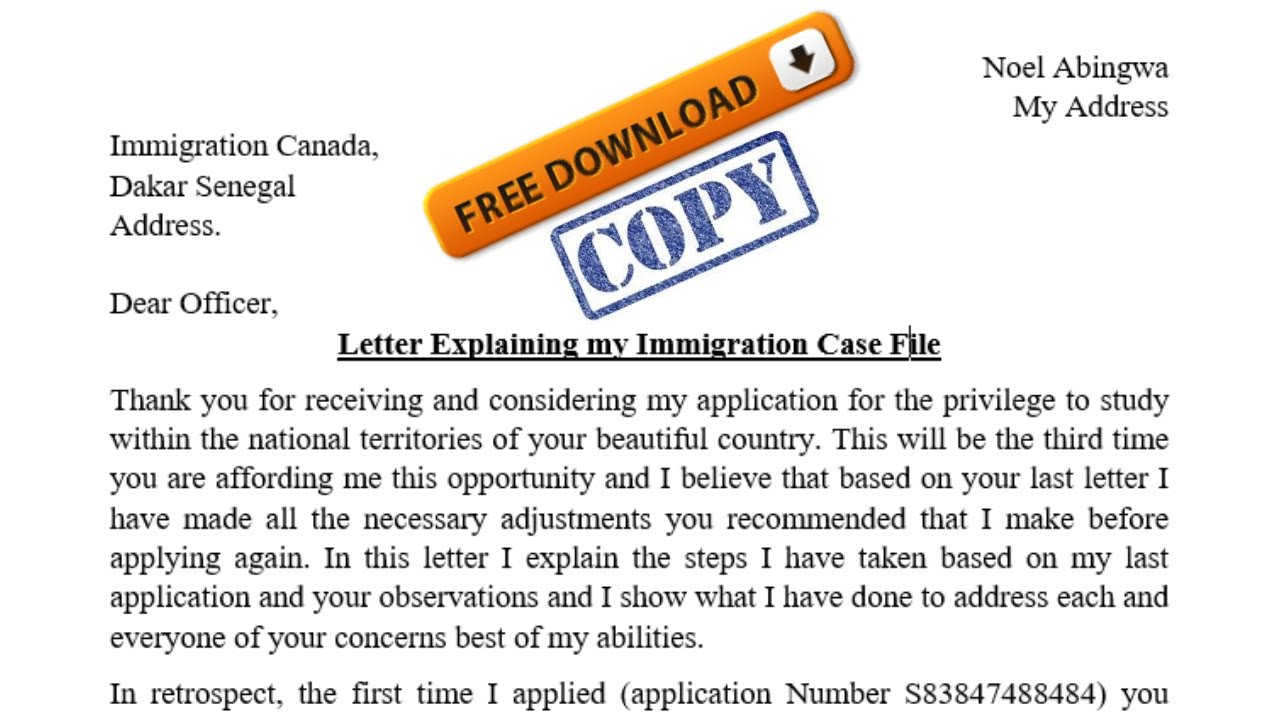 An explanation letter is necessary in certain cases, while it can be used as an option at other times.

This blog post will elaborate on the need for an explanation letter and how you should write one.

We will also give you tips on what should be included in such a letter and some sample templates you can use.

What Is An Explanation Letter to Immigration Officer?

An explanation letter is a document that clarifies the reason you are unable to leave the country when your visa expires.

It also explains why you need more time at this particular destination and how your stay will benefit you personally or professionally in some way.

This type of letter differs from other types of letters because it can be submitted by anyone who has been denied entry into another country due to the expiration of their visa or passport, whether they are an employee or tourist.

It’s important to note that an explanation letter should not be confused with an application for an extension on short-term visas.

The standard explanation letter is written formally and addresses the relevant authorities at the embassy or consulate, and the letter should always be typed, not handwritten.

Is An Explanation Letter to Immigration Officer Necessary?

You are required to submit an explanation letter to an immigration officer when you miss the interview, or you do not file a visa application.

It is necessary to submit this letter because it explains the reason for your delay and why you missed the interview.

For example, if a person files his/her application in January but misses his/her interview on February 28.

In this case, he/she needs to explain why they could not attend their scheduled interview on February 28 and provide an explanation for him/herself to book another appointment with the immigration office.

When Should You Send An Explanation Letter To Immigration Officer?

You should send an explanation letter to the immigration officer in the following cases:

What Should You Consider When Writing An Explanation Letter to Immigration Officer?

An explanation letter is written by any individual who wants to explain why they should be allowed into the country.

It is usually written by people who want to enter Canada. They write this letter so that they can explain their reasons and show how they will contribute positively to society in Canada if they are permitted entry into the country.

You must consider several things before writing your explanation:

How Can I Write An Explanation Letter to Immigration Officer?

If you are writing a letter to the immigration officer, an explanation letter for immigration is the best way to make your case.

A well-written and persuasive explanation letter will help you get a decision in your favor.

The following paragraphs explain how to write an explanation letter that will impress any immigration officer:

1. The Number Of Paragraphs:

An explanation letter should have at least 2 or 3 paragraphs but no more than 5 or 6. The number of paragraphs depends on how much information you want to convey and how long you can go without boring your reader.

2. Use Of Capital Letters:

Capitalize the first word in every sentence as well as proper nouns (like names) unless they are part of a list (e.g., “I had food poisoning because I ate this”). Do not capitalize contractions such as “can’t” or “isn’t.” Finally, do not capitalize words that don’t need it (e.g., “your” instead of “You’re”).

Other rules include the following:

What Should Be Included In An Explanation Letter to Immigration Officer?

The main idea of your letter may be to request information about something or to ask for help with some task or situation.

The main content of your letter will be based on this main idea, so you must make sure that it is clear from reading only the opening paragraph of your explanation letter to an immigration officer.

You can also use this opportunity to explain why you have chosen this particular language school over others to help them understand why they should choose yours.

Tips To Write An Explanation Letter to Immigration Officer

When writing an explanation letter to an immigration officer, it is important that you:

I am writing to explain some points that may interest you when considering the attached documents relating to {Corresponding Section}. Below is an explanation:

I am, of course, available to provide you with any other documents that you consider useful for processing my electronic Application for Permanent Residence (e-APR).

Thank you in advance for taking your valuable time to process my e-APR.

1 Can I Write A Letter To The Immigration Officer?

Yes, you have every right to correspond with the U.S. Citizenship and Immigration Services.

2. Is A Letter Of Explanation Necessary?

This letter could be needed for many applications like Express Entry, a Work Visa, a Student Visa, etc.

3. How Do I Talk To An Immigration Officer?

4. How Do I Inform Immigration Of A Change Of Circumstances?

You can tell us about a change to your circumstances by calling 131 202 and following the prompts.

5. What Are Urgent Humanitarian Reasons?

In some cases, urgent humanitarian reasons may be based on the need for the beneficiary to provide physical or emotional support to a relative in the United States.

6. How Do You Write A Letter Explaining How You Feel?

Communicating your thoughts and feelings is the secret to writing a letter to your emotions. To do so, ask yourself intentional questions about how this particular emotion has appeared in your life recently. Then write down the answers as if you were talking to the emotion itself.

7. Is A Letter Of Explanation The Same As A Statement Of Purpose?

A Statement of Purpose also called a Letter of Explanation, is a key part of your application for a study permit in Canada.

8. What Should A Support Letter Say?

Be specific in the support you can offer: if money, how much and for how long; if housing, for how long; if a job, how much the pay will be, full-time or part-time; if you can help with transportation and/or getting to and from job searches or self-help (AA, etc.) meetings.

Formal letters always have a salutation at the beginning of the written content as a sign that your message is just getting started. This is known as a greeting. Most greetings begin with “Dear” followed by the recipient’s name. All greetings use capital letters in the title and end with a comma.

10. What Makes A Good Expression Of Interest?

When sending your letter of interest, you should include information about your skills and experience that make you a good fit for the job or company.

An Explanation Letter to Immigration Officer is a letter of explanation that you can send to the immigration department if you cannot meet their requirements.

This letter should include all the necessary information about your case and why it was unsuccessful.

You should also include details about your circumstances, such as medical issues or family emergencies that may have prevented attendance at interviews or appointments with the immigration department. Feel free to drop feedback.