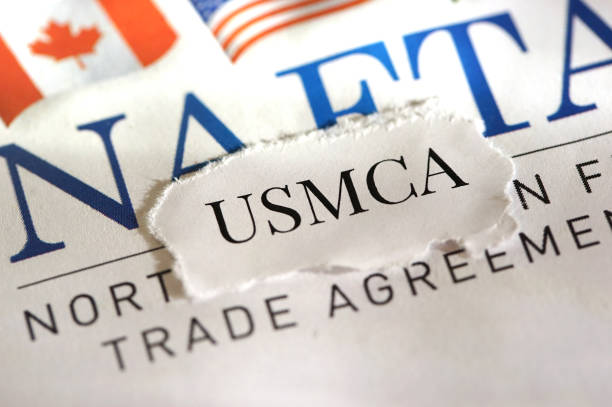 (NAFTA) was signed in 1994 and is at times referred to as “NAFTA 2.0” or “New NAFTA” because it retains or updates many provisions from its predecessor.

The USMCA was the result of renegotiations between NAFTA member countries that began in 2017 and were described as “tumultuous,” focusing primarily on “auto exports, steel, and aluminum tariffs, and the dairy, egg, and poultry markets.”

On September 30, 2018, all parties reached an informal agreement, which was formalized the following October 1.

USMCA was proposed by US President Donald Trump during the 2018 G20 Summit, and  Trump was the person who signed it, Mexican President Enrique Pea Nieto, and Canadian Prime Minister Justin Trudeau also signed.

On December 10, 2019, a revised version reflecting additional consultations was signed and ratified by all three countries, with Canada being the last to do so on March 13, 2020.

The agreement went into effect on July 10, 2020, after all, three governments informed each other that the provisions were ready for domestic implementation.

The USMCA substantially modernizes the provisions of the 25-year-old NAFTA, particularly in the areas of intellectual property and digital trade, and borrows language from the Comprehensive and Progressive Agreement for Trans-Pacific Partnership (CPTPP), to which Canada and Mexico are signatories.

Increased environmental and labor regulations; greater incentives for automobile production in the United States (with quotas for Canadian and Mexican automotive production); greater access to Canada’s dairy market; and an increased duty-free limit for Canadians who buy U.S. goods online are among the key differences between it and its predecessor.

On May 18, 2017, US Trade Representative (USTR) Robert Lighthizer notified Congress that he intended to renegotiate NAFTA beginning in 90 days.

Negotiations began on August 16, 2017, and lasted until April 8, 2018, with eight formal rounds of talks. In the absence of a resolution, Lighthizer stated on May 2, 2018, that if no agreement was reached by the end of the month, negotiations would be suspended until 2019.

This statement was motivated by Mexico’s impending change of government, in which the then-incoming President, Andrés Manuel López Obrador, disagreed with much of the negotiated language and may be unwilling to sign the agreement.

Separately, on May 11, 2018, House Speaker Paul Ryan set a deadline of May 17 for Congressional action. This deadline was ignored, and the agreement with Mexico was reached on August 27, 2018.

At the time, the agreement proposed had not been accepted by Canada Because, Mexico’s outgoing president, Enrique Pea Nieto, left office on December 1, 2018, and a review period of 60 days is required, the deadline for providing the agreed text was September 30, 2018, which was met precisely on September 30.

Negotiators worked around the clock and reached an agreement on a draft text less than an hour before midnight on that date.

The USMCA text was published as an agreed-upon document the following day, October 1, 2018. Lighthizer praised and thanked Jared Kushner for architecting the deal and saving it from collapse several times.

The agreed-upon text of the agreement was signed on November 30, 2018, as a side event to the 2018 G20 summit in Buenos Aires, Argentina.

The English, French, and  Spanish versions will be equally authentic, and the agreement will go into effect following ratification by all three states via the passage of enabling legislation.

The United States Ambassador to Canada Kelly Craft took the lead in trade negotiations between the United States and Canada, which resulted in the signing of the new trade agreement.

Her contribution to the trilateral agreement raised her standing in the Trump administration.

Stephen Schwarzman, the CEO and founder of American LBO specialist The Blackstone Group, later revealed in a memoir that he had induced Justin Trudeau to concede the protected dairy market during the USMCA negotiations.

According to Schwarzman, Trudeau was concerned that a recession would jeopardize his government’s chances in the 2019 Canadian federal election.

The USMCA is expected to have a negligible impact on the economy.

According to an International Monetary Fund (IMF) working paper released in late March 2019, the agreement would have “negligible” effects on the overall economy.

According to the IMF study, the USMCA “would damage  trade in the automotive, textile, and apparel sectors, while generating modest aggregate gains in terms of welfare/upkeep, primarily due to improved goods market access, with a negligible effect on real GDP.”

According to an April 2019 International Trade Commission analysis of the likely impact of the USMCA, when fully implemented (six years after ratification), the agreement would increase US real GDP by 0.35 percent and total employment by 0.12 percent (176,000 jobs).

The Economic Policy Institute’s Thea M. Lee and Robert E. Scott criticized USMCA in December 2019 as “weak tea, at best” because it would have “virtually no measurable impacts on wages or incomes for US workers,” noting that “the benefits are tiny, and it’s highly uncertain whether the deal will be a net winner or loser in the end.”

The Nikkei Asian Review reported in June 2020 that Japanese automakers are opting to “triple Mexican pay rather than move to the US” to avoid tariffs on automotive parts.

Throughout his 2016 election campaign and presidency, Trump was harshly critical of NAFTA (often referring to it as “the worst deal ever”) “Perhaps the worst trade deal ever made,” he says, while praising USMCA as “a fantastic deal for all of us.”

The USMCA is very similar to NAFTA, retaining many of the same provisions while making only minor, mostly cosmetic changes, and is expected to have a minor economic impact.

Former US Trade Representative Mickey Kantor, who oversaw NAFTA’s signing during Bill Clinton’s presidency, stated, “It is the original NAFTA.

The agreement’s provisions cover a wide range of topics, including agricultural products, homelessness, manufactured goods, labor conditions, and digital trade, among others.

Some of the more notable aspects of the agreement include giving US dairy farmers greater access to the Canadian market, guidelines to have a higher proportion of automobiles manufactured within the three countries rather than imported from elsewhere, and the retention of the NAFTA-style dispute resolution system.

Automobile rules of origin (ROO) require that a certain percentage of an automobile’s value be sourced within the governed region. The required portion in NAFTA was 62.5 percent.

The USMCA raises this requirement by 12.5 percentage points to 75% of the vehicle’s value.

The Trump administration’s initial proposal was an increase to 85 percent, with the additional stipulation that 50 percent of the automotive content be manufactured in the United States.

While the text of the agreement did not include the more stringent version of this provision, there is concern that increased domestic sourcing, which is intended to promote US employment, will result in higher input costs and disruptions to existing supply chains.

The USMCA will increase the length of copyright in Canada to life plus 70 years, and 75 years for sound recordings.

This extension reflects the same IP policy outlined in paragraph 18.63 of the Trans-Pacific Partnership.

Furthermore, biotech firms would have at least ten years of exclusivity for agricultural chemicals (double the current five), and the period for industrial designs would “jump” from ten to fifteen years.

In comparison to NAFTA, USMCA would require criminal penalties and civil remedies for both satellite and cable theft, reaffirm the Doha Declaration on TRIPS and Public Health, include the strongest due process and transparency requirements for Geographic Indicator protection systems in any FTA, require criminal procedures and penalties for recording copyrighted movies in movie theatres, and give customs officials ex officio authority to stop suspected contraband.

The USMCA allows for a patent term extension when there is an “unreasonable curtailment” of a pharmaceutical’s patent term due to regulatory or marketing approval delays.

New pharmaceutical products are those that do not contain a previously approved chemical entity in that Party.

For at least five years from the date marketing approval was first granted, generic manufacturers are abolished from depending on the innovator’s previously undisclosed safety/efficacy testing.

Mexico agreed to broaden the scope of its data protection for new pharmaceutical products.

Initially, the parties discussed creating an exclusivity period of at least ten years from the date of approval for new products containing biologics.

A biologic is defined as a product “created using biotechnology processes and containing a virus, therapeutic serum, toxin, antitoxin, vaccine, blood, blood property or derivative, allergenic product, protein, or analogous product for use in humans for the prevention, treatment, or cure of a disease or condition.”

This period would have been way longer than Canada’s and Mexico’s exclusivity periods, but shorter than the United States period.

This provision has been heavily criticized for its potential to restrict access to and make biologic medications unaffordable. Due to that, biologics were included in the definition of “new pharmaceutical products” and are now approved for a minimum five-year protection period.