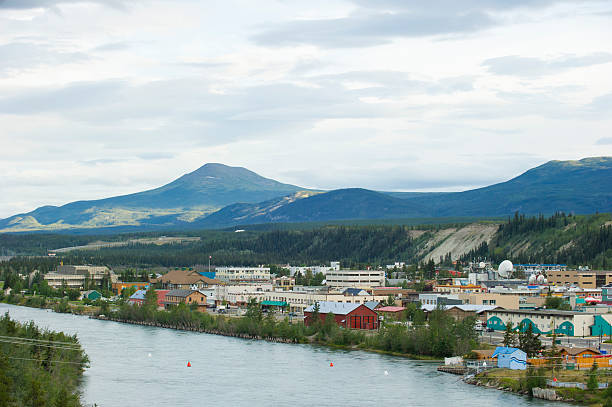 It is also Canada’s second-least populated province or territory, with a population of 40,232 as of the 2021 Census.

The territorial capital, Whitehorse, is the largest settlement in any of the three territories.

Yukon Territory was formed from the North-West Territories in 1898. The Yukon Act, which received royal assent on March 27, 2002, established Yukon as the territory’s official name, though Yukon Territory is still widely used, and Canada Post continues to use the territory’s internationally recognized postal abbreviation of YT.

Although the Yukon government is officially bilingual (English and French), it also recognizes First Nations languages.

Mount Logan in Yukon’s Kluane National Park and Reserve, at 5,959 m (19,551 ft), is the highest mountain in Canada and the second-highest on the North American continent (after Denali in the U.S. state of Alaska).

The majority of Yukon has a subarctic climate, with long, cold winters and brief, warm summers. The climate along the Arctic Ocean’s coast is tundra.

The Yukon River, as well as the Pelly, Stewart, Peel, White, Liard, and Tatshenshini rivers, are notable.

According to statistics, Canada estimates Yukon’s 2021 Q3 population to be 43,095, a 17.5 percent increase over the 2016 census. This is the highest percentage increase for any province or territory in Canada.

Statistics Canada, unlike other Canadian provinces and territories, treats the entire territory as a single at-large census division.

According to the 2016 Canada Census, the majority of the territory’s population is of European descent, despite the presence of numerous First Nations communities throughout the territory.

The ethnocultural diversity and immigration in the Yukon were investigated in the 2011 National Household Survey.

At the time, 87.7% of residents were Canadian-born, while 24.2 percent were Indigenous.

The United Kingdom (15.9 percent), the Philippines (15.0 percent), and the United States were the most common countries of birth for immigrants (13.2 percent ). 63.5 percent of very recent immigrants (born between 2006 and 2011) in the Yukon were born in Asia.

According to the 2011 National Household Survey, 49.9 percent of Yukoners have no religious affiliation, the highest percentage in Canada.

Christianity was the most commonly reported religious affiliation, with 46.2 percent of residents reporting it.

English was the most commonly reported mother tongue among the 33,145 single responses to the 2011 Canadian census, with 28,065 respondents (85percent).

The Yukon’s Language Act “recognizes the significance” of the territory’s aboriginal languages and allows them to be used in Legislative Assembly proceedings, but only English and French are available for laws and court proceedings.

The Yukon hosts a variety of cultural and sporting events that draw artists, locals, and tourists.

The Yukon’s Aboriginal culture is also strongly represented in winter sports, such as the Yukon Quest sled dog race.

Yukon Jack, a modern comic-book character, portrays a heroic aboriginal persona. Similarly, the territorial government recognizes that First Nations and Inuit languages play an important role in the territory’s cultural heritage; these languages include Tlingit and the less common Tahltan.

Jim Robb and Ted Harrison are two notable Yukon artists whose paintings have become iconic for depicting historic and contemporary life and culture in the Yukon.

The legacy of the Klondike Gold Rush (1897–1899), which inspired contemporary writers of the time such as Jack London, Robert W. Service, and Jules Verne, and which continues to inspire films and games such as Mae West’s Klondike Annie, is a notable cultural and tourist feature.

Air North, Yukon’s airline, has its headquarters and primary hub at Whitehorse International Airport. An airport or community aerodrome serves every Yukon community.

With the first closure of the Faro mine in the 1980s, the railway ceased operations. It now operates between Carcross and Skagway, Alaska, during the summer months for the tourism season. [citation required]

The Alaska-Alberta Railway Development Corporation (A2A) intends to build a new railway line through the Yukon, connecting Watson Lake and possibly Carmacks but not Whitehorse.

The only way to get to the far north community of Old Crow is by plane.

Riverboats plied the Yukon River from the Gold Rush until the 1950s, mostly between Whitehorse and Dawson City, with some continuing to Alaska and the Bering Sea, as well as other tributaries of the Yukon River such as the Stewart River.

The British-Yukon Navigation Company, an arm of the White Pass and Yukon Route that also operated a narrow-gauge railway between Skagway, Alaska, and Whitehorse, owned the majority of the riverboats.