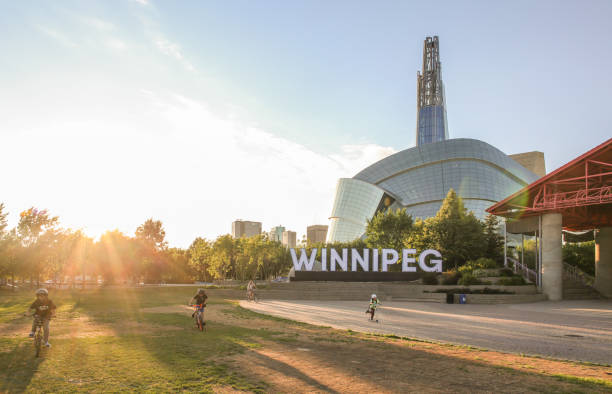 Winnipeg, Manitoba’s capital is the largest city and the province’s largest metropolis. It is situated in Western Canada, in the eastern part of the Canadian Prairies.

The city is best known as the “Gateway to the West,” as it links the provinces of Ontario and the Prairies. It is a diversified economy with a railway and transportation hub.

The Manitoba Provincial Nominee Program attracted a record number of immigrants to Canada, and Winnipeg became home to thousands of newcomers. As a result, it is also well known as a multicultural city.

The city is named after Lake Winnipeg, and it is surrounded by four lakes. It’s also close to several lakes and parks in the Canadian Shield.

Before the introduction of European settlers, it served as a trading place for Indigenous people. In 1873, Winnipeg was formally constituted as a city.

Following the development of the Canadian Pacific Railway in 1881, the city flourished quickly. In 1911, it was Canada’s third-largest city. Today, it is the country’s sixth-largest city.

How Many People Live In Winnipeg, Manitoba

According to the 2021 Census, Winnipeg has a population of 749,607 people. The Winnipeg Metropolitan Region is made up of 18 municipalities with a combined population of 834,678 people.

The city’s population is diversified, with a significant proportion of people of European descent and the country’s highest concentration of Aboriginal people.

The Economy Of Winnipeg, Manitoba.

Winnipeg has one of the fastest-growing economies among Canada’s major cities. It also has one of the most diverse economies in the country, with manufacturing, financial services, information technology, and other industries.

The Royal Canadian Mint, which produces all of Canada’s circulating coinage, is also located in Winnipeg. The Mint also produces medals, gold, silver, palladium, and platinum bullion coins, as well as coinage for other governments.

Winnipeg’s financial services sector is one of the country’s largest, and the city is home to the headquarters of some of Canada’s top insurance and investment businesses.

The following are some of Winnipeg’s most important industries:

Large corporations from a variety of industries call this city home.

The following are some of Winnipeg’s top employers:

Career Pathways For Those Living In Winnipeg, Manitoba.

Newcomers to Winnipeg can use a variety of services to look for job possibilities in the city. Working with Immigrant Centre Manitoba Inc., Manitoba Start, Neighborhood Empowerment and Resource Centre, and SEED Winnipeg Inc. can help you with your job search.

Local employment recruiters such as Pinnacle, Robert Half, and David Aplin Group can also help.

The Housing Market For People Living In Winnipeg, Manitoba

Another key step that will assist you in settling in Winnipeg is deciding on a place to call home. There are many different neighborhoods to pick from in the city.

Your actual location, as well as the street you live on, will have an impact on you daily. Consider things like the availability of public transportation, stores, schools, hospitals, childcare, and your workplace when deciding where to live.

House prices are likely to continue rising due to population increase and demand for new dwellings.

Despite this, property prices in Winnipeg remain low in comparison to other Canadian cities. For the past many years, the newest residences have been developed in the city’s south sector, such as south St. Boniface, south St. Vital, and Fort Garry.

Finding A Place To Rent In Winnipeg, Manitoba.

Finding a property to rent is simple when you search online. To find available rental properties in Winnipeg, go to “Rentals for Newcomers“. You can also get the most up-to-date rental costs in Winnipeg right here.

Buying A Home In Winnipeg, Manitoba.

In comparison to other large Canadian cities, Winnipeg’s housing prices are much lower. When compared to cities like Toronto or Vancouver, home prices are frequently half as much.

According to a Royal Lepage House Price Survey conducted in the fourth quarter of 2021, the average price of a property in Winnipeg was $357,200. It’s a 9.6% increase from the previous year. Single-family detached home costs $390,800 on average, while a condo costs $233,600 on average.

Winnipeg’s road infrastructure is well-connected. Highways run through the city in all directions, making it simple to move about.

The Trans-Canada Highway passes through the city from east to west, while the Perimeter Highway, sometimes known as the beltway, revolves around it. The busiest border crossing on the Prairies is Provincial Trunk Highway 75, which connects to the United States.

A Manitoba driver’s license is required for all drivers. Understanding the regulations of the road and having great winter driving skills are essential.

Winnipeg Transit operates the city’s public bus system. It has 84 fixed routes that it follows. The buses usually run from 6 a.m. to late at night.

The transit website has a journey planner where you can key in your location and get directions to your desired place. To find out how much it costs to take the bus, go here.

The Winnipeg James Armstrong Richardson International Airport is a good option for flight travel. The city also serves as a rail hub. At Union Station, you can board the Via Rail train.

Winnipeg is a popular destination for newcomers. When you relocate to the city, numerous community organizations support and assist you. Immigration Partnership Winnipeg and Manitoba Immigrant and Refugee Community Organization are two of the leading groups.

When you first arrive in Canada, you should open a bank account and get your money in order. It is also a simple process for permanent residents to complete. To open an account, go to a local bank or credit union.

They can also assist you in obtaining a credit card, a line of credit, a mortgage, or other financial goods.

The Educational System For Those Living In Winnipeg, Manitoba.

The Manitoba government is in charge of the education system in the province. This comprises all primary, secondary, and post-secondary schools.

Winnipeg is divided into seven school divisions. The Winnipeg School Division is the largest, with 77 schools and approximately 5,300 employees. It educates over 33,000 pupils.

With over 200 full-time and part-time programs, Red River College is Manitoba’s biggest institute for applied learning.

Where To Get Medical Care If You’re Living In Winnipeg, Manitoba

Manitobans are eligible for government-sponsored health care. Newcomers should apply for a Manitoba Health Card, which they must present if they require medical aid. Although the Manitoba government does not cover all services, most employers provide extra health insurance.

You can pay for extra health insurance coverage to cover prescription medicines and some services that Manitoba Health does not cover. Dial 9-1-1 in the event of a medical emergency.

How To Find A Family Doctor If You’re Living In Winnipeg, Manitoba.

A new resident of Manitoba must find a family physician after acquiring health coverage.

If required, family doctors can prescribe medications and refer their patients to specialists or hospitals. The Family Doctor Finder maintains a current list of Winnipeg family doctors who are currently accepting new patients.

You can go to a walk-in clinic if you haven’t located a family doctor. Prescriptions can be written and patients can be referred to specialists and hospitals by doctors at walk-in clinics.

The Weather In Winnipeg, Manitoba.

Winnipeg is one of Canada’s sunniest cities. Clear skies, on the other hand, do not always imply warm weather. Winters in Manitoba’s capital are bitterly cold and windy, lasting from November to March.

Winter temperatures can feel considerably colder than they are due to strong winds. The wind chill is a measurement of how cold it feels to the typical person at a given location.

The summer months are usually May to August. The average temperature in July is between 19.5°C and 25.5°C.

The greatest July temperature ever recorded was 40.6°C in 1949. In the spring and summer, the city experiences thunderstorms and tornadoes a lot. As a result of its flat landscape and melting snow, Winnipeg is susceptible to severe flooding.

Newcomers chose to live in Winnipeg, Manitoba for a variety of reasons. The city provides affordable accommodation, a low cost of living, and a wide range of job opportunities.

It also boasts a diversified and multicultural population. You have access to a powerful health care system and world-class universities in addition to the city’s fantastic culture.