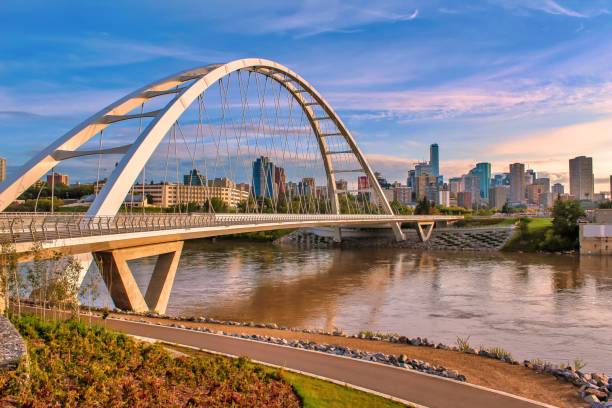 Edmonton, Alberta, is located along the North Saskatchewan River, just 220 kilometres northeast of the Rocky Mountains.

The city is situated on the edge of the prairies and the boreal forest, resulting in a stunning and diverse landscape.

The North Saskatchewan River runs through the city, creating numerous ravines and accounting for the abundance of urban parkland known as the ‘Ribbon of Green’, which is the longest stretch of connected parkland in North America.

Edmonton is North America’s most northern city, with a metropolitan population of over one million people.

Despite being the provincial capital, it is Alberta’s second-largest city after Calgary. Because Edmonton is heavily reliant on automobiles, many shopping and entertainment districts are concentrated in a few key areas, including South Edmonton Common, Whyte Avenue, West Edmonton Mall, and Jasper Avenue, to name a few.

Though the Edmonton economy, like the province of Alberta, has faced some challenges in recent years, the city’s diverse job market means that opportunities exist across sectors for those willing to look.

Edmonton is in Alberta, which is the only province without a provincial sales tax (PST). Edmonton is the major economic centre for northern and central Alberta, as well as a major oil and gas hub.

Calgary’s economy is primarily based on the petroleum industry, agriculture, and tourism. Alberta controls the majority of Canada’s oil industry. Its reserves of oil sands are thought to be second only to Saudi Arabia’s.

Edmonton has long been a centre for Alberta’s petrochemical industries, earning it the moniker “Oil Capital of Canada” in the 1940s.

Despite its apparent emphasis on oil and gas, Edmonton has one of the most diverse economies in Canada.

A strong technology sector is one of the major industrial sectors. The reputation of Edmonton as one of Canada’s premier research and education centres has contributed significantly to the city’s growth in the technology sector.

Moving to Edmonton is a big decision, and it’s important to know what to expect in terms of weather.

Edmonton has a continental climate that is relatively dry and humid, with extreme seasonal temperatures.

Although the city’s winters are milder than those of Regina and Winnipeg, Edmonton is located further north.

Temperatures can, however, rise above 30 °C (86 °F) and fall below -20 °C (-4 °F) for a few days each year. Despite the temperature swings, Edmonton is one of Canada’s sunniest cities, with 17 hours and 16 minutes of daylight at the summer solstice due to its location.

Winter lasts from November to March, and its length and severity vary greatly. Spring and autumn are both brief and highly variable seasons.

Thunderstorms are common during the summer months, and while they occasionally cause damage, they can be spectacular.

Living in Edmonton provides a variety of job opportunities. As a major oil and gas hub, it attracts a large number of migrant workers.

As a result, the city has a diverse ethnic population, with more than 25% of the local population belonging to a “visible minority,” primarily Chinese and other Asian ethnicities.

Edmonton is a fun place to live because it hosts several large festivals each year, earning it the nickname “The Festival City” among locals.

Among these festivals is the Edmonton International Fringe Festival, which is the second-largest in the world after the Edinburgh Fringe Festival and the largest of its kind in North America.

Edmonton has a vibrant cultural scene that includes galleries, theatres, live music venues, and concert halls, including the Francis Winspear Centre for Music, which has one of the best acoustics in Canada.

The city has produced many notable musicians, ranging from the Edmonton Symphony Orchestra to Cadence Weapon and Shout Out Out Out Out.

Living in Edmonton is fantastic, and the city is famous for West Edmonton Mall, North America’s largest shopping mall.

The mall features an indoor amusement park with one of the world’s largest indoor roller coasters, a swimming pool with a water park, marine life shows, mini-golf, bowling, a skating rink, and laser tag.

Recreation and arts opportunities are another extremely positive aspect of metropolitan Edmonton. Within the city river valley, there are miles and miles of parkland and trails.

Hawrelak Park, located just north of the University of Alberta, is one of the most well-known parks. In the winter, it is ideal for skating and cross-country skiing. In recent years, it has also been the site of massive ice castles (which can be toured for a fee).

When the weather warms up, it becomes an ideal location for picnics and other outdoor activities.

This park also hosts a few Edmonton festivals, the largest of which is the Heritage Festival, which takes place at the end of July/beginning of August. It is worth noting that various themed festivals are taking place.

The LRT system is extensive, stretching from the north to the far reaches of the south side. One disadvantage is that the LRT line only runs north-south, rather than east-west.

The Edmonton Transit System consists of an LRT network that connects major central and downtown areas, as well as a bus system that serves the entire city.

Cost of living in Edmonton

Edmonton residents have the highest average household income in Canada, as well as a low cost of living.

There are fewer taxes, and there is no provincial sales tax (PST). Edmontonians, on average, have more disposable income than the majority of Canadians.

Overall, I believe Edmonton is an excellent place to live, particularly for families. Your family will enjoy it here as long as you are aware of and prepared for seasonal weather changes.